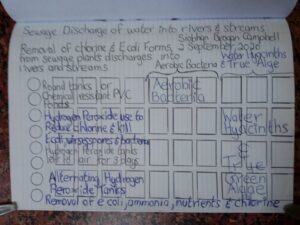 By choosing to understand how e coli levels from Potsdam Sewage Plant effect Milnerton lagoon, residents and the biodiversity of the natural environments, problems can then be identified and solutions implemented.
27 October 2020, Siobhan Brogan-Campbell, Douglas Campbell
Identifying the problems:

Removing pollutants from Milnerton Lagoon
– Omega 8 and Omega 10, with floating draft barriers that direct the vertical water columns pollutants to enter Omega 10.
– Use the tidal flows of both directions.
– Pollutants debris in the surface is directed by barrier floatation draft wall.
– Pollutant debris in the vertical columns of water, move along the bowed wall of the barrier’s draft.
– Pollutant debris then approaches the Omega 10 entrance, where the barrier wall draft is shorten, to produce a straight wall.
– A canvas ramp ramp lies at the entrance of the Omega 10, that extended to the bottom, on a frame that allow water to flow underneath the Omega 10.
– Infront of the ramp, lies another ramp, that causes the debris in the vertical column to be directed upwards.
– The Omega 10 has aerating bubbles to left the debris and pollutants in the vertical water column to the surface.
– Omega 8 lies down current, with aerated bubbles and electric pumps on its out side to pump water into the Omega 8, so that centrifugal forces will spine the debris outwards towards it’s circumference.
– A second Omega 8, lies down current that will skim off the debris and pollutanta from the circumference of the first Omega 8.
– The volume draft of the 2nd Omega 8 will grow deeper with debris particles and pollutants.
– Depending upon the debris and pollutants, it can either be trucked for processing at the e coli, ammonia and nutrient site, to re- enter the lagoon water.
– Or be processed at centrifugal sites, to remove any toxic chemicals, heavy metals or spillages.
– Or if it is sewage it can be trucked to the Potsdam Sewage Plant or another plant.

– Cheap devices that can restore beneficial bacteria, phytoplankton and diatoms to Milnerton Lagoon.
Aids the zooplankton food chain.
Zooplankton and crabs contain bacteria and enzymes that can inhibit the growth of pathogenic bacteria and viruses.
Blue horseshoe crab blood, used for the purpose of vaccine batch testing.
Crabs eat decaying matter that is colonised by bacteria attached to the dead and decaying flesh.
– Cheap devices that remove the chlorine, e coli, ammonia, methane and nutrients been releases from Potsdam Sewage plant into the Diep River.
For people and businesses who would like to see the above solutions become a reality for the health of Milnerton Lagoon, for residents, water activities, joggers, walkers, pets and the biodiversity, you support these solutions at ( eaglesaquaguardians.org), in many ways.
How to support these solutions to become a reality
– you can sign up your business to advertise your brand name, that you make donations towards these solutions.
Consumers from the area will then know that spending at your businesses, aids them aid the Milnerton Lagoon.
– Tourism and travel agencies, that sell Nature-based natural environments travel packages to their client.
Clients that support them will know that some of their money spent, will aid Milnerton Lagoon.
– you can also nominate the device you would like to support.
– people wanting to get involved in the solutions can email the website or available awareness emails.
– the public can also donate to any device solution that appeals to them.
The devices are quick and easy to constructed and install.
Without interventions to combat the various sources of pollutants, the Milnerton Lagoon waters will pose health threats, that will intensify.
Seasonal winter rains, cause the flooding of all upper marshlands areas in Milnerton Lagoon, where the water will turn a dark tan colour and pour out if the lagoon mouth.
The water densities team with dead diatom silica enzyme and mineral salts, from the previous dry seasons salt pans and dead diatoms, that promote the growth of beneficial phytoplankton, diatoms and bacteria, that neutralise e coli forms, no amount of sewage flows of e coli can cause the water to turn a muddy stinky light brown colour, for the combating bacteria are in full force to digest toxic peptides and molecules.
Nature has the solutions, for the Blue Planet’s gifts of life.